Rachel Willis-Sørensen : « I never run out of ideas! »

She sings Verdi, Meyerbeer, Gounod, Wagner or Puccini with the same talent, and in a few years has become one of the most appreciated and sought-after sopranos of the moment. Meet Rachel Willis-Sørensen, « never short of ideas » to bring to life with passion the roles she plays!

Nicolas Mathieu : How did you discover opera, Rachel Willis-Sørensen ?
Rachel Willis-Sørensen : I have always been a singer. I started music by singing in choirs, I sang musical theater pieces and a lot of jazz music. It is funny because as a classical musician now, the idea of performing live music improvised is actually a nightmare ! I started taking lessons when I was barely 17 and my teacher taught me that if I sang in the wrong way I could lose my voice, something that terrified me because I was singing with the wrong technique.
Initially, I didn’t have any intention of singing classical music. I just thought that if I learned classical technique, then I would be able to sing pop music or musical theatre even better. But the more I learned it the more I thought there was nothing else that could describe so well the emotional human condition like this.

You won the Operalia competition in 2014. What are some of your memories?
It was almost unfair to participate because in 2011 I had won the International Hans Gabor Belvedere Singing Competition, which was a good opportunity to sing in front of a lot of people. I got jobs from that, good contracts, and my Met debut was already planned. But I never got the opportunity to sing in front of Placido Domingo personally. And I had the same enthusiasm about him as teenagers with boybands (laughs). I was 29, I felt I could do it and was at the right age to do so….and I won the whole thing! It was such a good experience. I learned so much. For example, it made me realize that for many years I was waiting for someone to approve my singing and the toxic perfection mongering correlated to that, something very common in classical music. I also realized that things are worth doing, even if they are imperfect, and that I kind of love this frailty of humanity. I think this is what moves us and is moving for the audience.

Who are the sopranos you admire and from whom you draw inspiration?
The first is Maria Callas. Everything she did was a dream, she possessed this musical quality and there was this magic of her. Renée Fleming is someone so artistic and so different, with something really specific to offer. There is also Joan Sutherland, Anna Moffo, Birgit Nilsson, who has such a big voice, Jessye Norman, that I would have loved to see in a live concert, or Sabine Devieilhe, who is such a magician. I get excited by anybody’s voice if the sound is well produced. 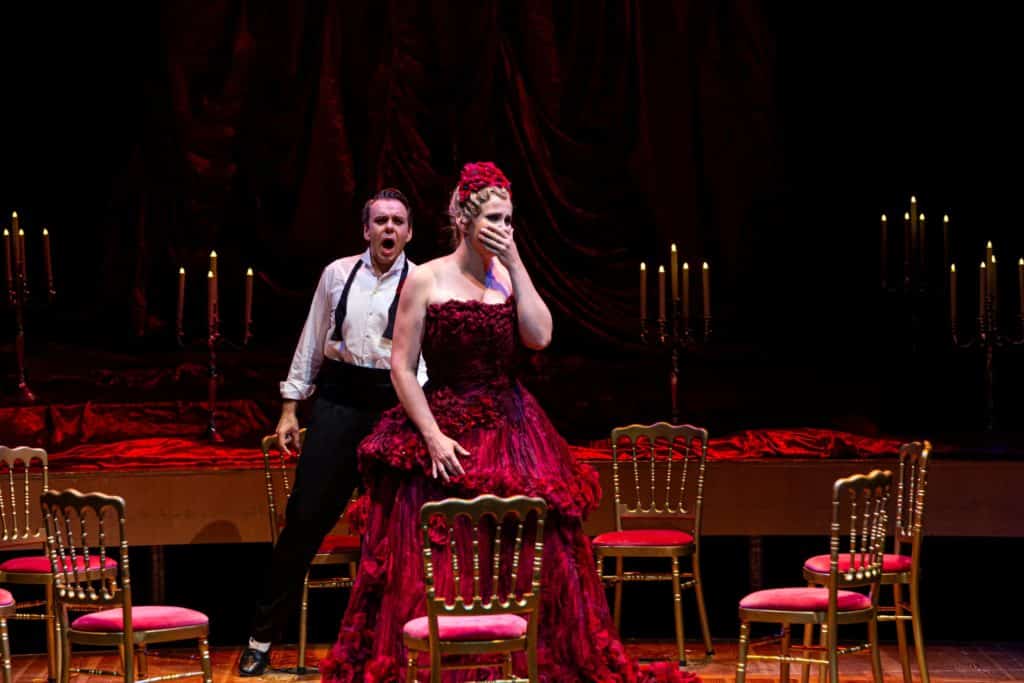 You took on the role of Violetta in Verdi’s La Traviata in Bordeaux earlier this year. It is often said that this role requires 3 voices at the same time: lyrical, capable of coloratura, combined with dramatic abilities… How did you prepare such a difficult role?
This role is something I’ve always secretly dreamt of singing. But I’m very tall and blonde, which is maybe what a valkyrie is supposed to look like (laughs). So people, before I opened my mouth were saying ‘Wagner’!

I love singing Wagner, but for now, my two most beloved projects were to sing Rusalka and Violetta.
So when Bordeaux offered me Violetta, I cried with joy. But I also felt silly because people did not see it coming at all. It seemed like a weird choice, because I was singing roles like Leonore. Also, Violetta with a bigger voice is not popular. Still, it was a great joy to prepare this role and a great opportunity. And more than everything else, as I was going through a difficult moment in my personal life at that time, this role was therapeutic and helped me a lot with the progress of my soul.

How do you manage to build your own interpretation among all of the existing ones?
Something is linked to my out-of-control personality, I never don’t have ideas! (laughs)
I always try to be text-motivated. And once I am in the text, whatever the music is saying, I am trying to say the text with the music. I believe if your choices are motivated by the text, you are always close to the composer’s intents as he is inspired by a story to write his music.
And as music in particular is concerned, lots of things are already told in the score, like the dynamics. But I have the opinion that things like tempi are extremely biological. This is why I feel it is sort of messed up for a conductor to insist on a specific tempo with a singer, especially for coloratura which has a lot to do with the singer’s vibrato. 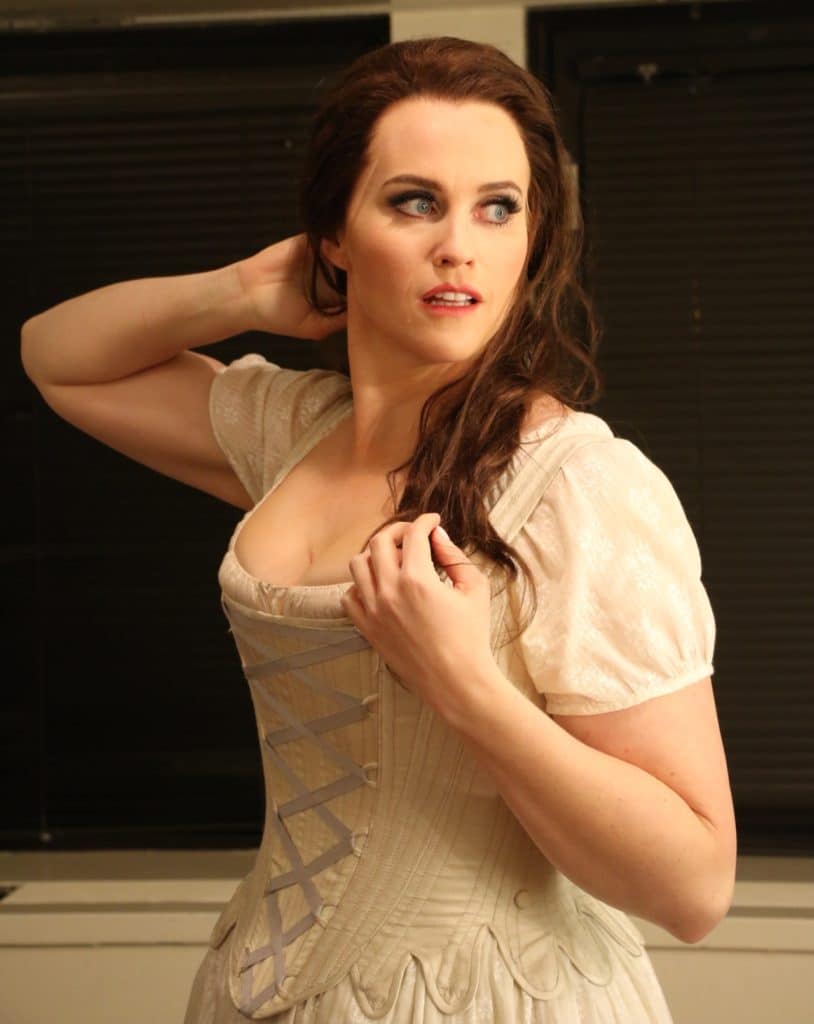 You recently sang Valentine from Les Huguenots by Meyerbeer in Geneva, and also have Marguerite from Faust in your repertoire. Is French repertoire something you would like to explore further?
Yes! It’s my favourite actually. The French language is very specific, and is not easy to my anglocentric mouth. But it is so melodic, with such beautiful vowels! I love French music and the romantic French repertoire. Massenet is so underestimated, in my opinion. Or Meyerbeer! When I started learning Les Huguenots, I had to work so much on it! There was this duet with the bass on which I literally spent a year. This language is so sensual, tender and delicate, but also passionate. The issue I may have with it is that I am too bombastic, too effervescent and enthusiastic while French music, like French people I guess, has to be pervaded with a certain coolness (laughs).

Something very impressive is the diversity of your repertoire. Why did you choose this strategy and how do you determine the roles you embody?
Knock on wood that it keeps working! (laughs) I believe diversifying your repertoire promotes the longevity of the instrument. If you do the same exercise every day, it will weaken other areas. You have to diversify, to face up new challenges or you don’t grow. But people love to categorize, to say: ‘this is what you are’. And even if I didn’t sing Wagner for a while, when Jonas asked me to sing Mimi in November 2020, I could read comments like ‘she has a dramatic voice for the German repertoire, why is she singing Puccini?’. This is so subjective! The idea of specifying your repertoire is kind of new actually. People didn’t do that 60 years ago. It was very common for a soprano to sing anything written for soprano. Also, as an American singer, my culture is the one of the melting pot so for the opera it means being competent on every language and in every style. Lastly, I believe that you may sing different repertoires but you only have one instrument. The technique of singing, I would say, is universal, from a composer to another. Of course, each composer implies a specific work in the singing, but the instrument itself and the production of sound do not really change.

We can discover more about your work on stage and off stage on social media, on which you have a great presence…
What I like most about social media is the sensation of providing a resource I didn’t have myself when I was starting, and also finding a community of people interested in it. At first, I didn’t know it was that important. But when I met my press agent, she told me how I should be conscious about my digital presence as it would become more and more important. The first thing was she asked me to make a video about warming up. I thought no one would care about it, and I was very embarrassed at first actually because there is such a subject about perfection on classical music. But I made this video and it got a huge response. People were really interested, and a lot of them were young singers. So I started saying things that no one told me and that I wish I had learned 10 years ago. And I noticed I was feeling so good talking about it, giving those young singers useful content and more generally encouraging them to believe in themselves and to keep following their instincts and see where they go.

You have featured Jonas Kaufmann’s CD Mein Wien but have not yet made a solo recording… Is there something cooking?
There are a few projects in the works, but unfortunately I can’t say much yet! Stay tuned!

Will we hear you again soon in France?
I can’t say that much about it yet, but I will be doing a great concert in October in Paris with an amazing conductor I love working with. I love France and am really looking forward to coming back!

For the interview in French :